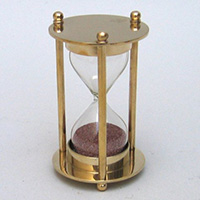 I Was Once Obsessed with Time

I was once obsessed with time. Yeah, that’s right…me. The guy that everybody says is “so laid back” and has such a calming presence. It might surprise them to know that as a wee lad, I was so impatient that I could hardly slow down long enough to put my breakfast cereal in a bowl. Who said you couldn’t streamline the process and pour the milk right into that family size cereal box and eat your fill? When you’re done, just put the cereal box back in the fridge. Next morning just grab the box and a spoon and get busy. No muss, no fuss…but mostly, no waiting.

The reaction of cornflakes sitting in milk hadn’t occurred to me in those tender impressionable years. I was a kid on a mission. I was too busy plotting the shortest distance between the kitchen table and the playground. Besides, I was convinced that my “milk in the cereal box” idea would work. So, I tried it.

Let’s just say that the early stages of my scientific genius made a negative impression on my mom. Getting grounded for a week may have slowed my progression to the playground by a few days but I was certain that the problem lay with faulty box construction, and not with my idea.

In fact, the cereal makers proved (read stole) my theory when they introduced cereal boxes that you could pour milk into without a problem. I could’ve been worth millions if I’d known what a patent was.

Those were exciting times for the impatient. Popular family drinks were coming out with new timesaving inventions like “pre-sweetened” beverages. Then the cereal giants topped that with “instant bananas.” They tasted like banana flavored dry wall chips but not having to buy, peel and cut bananas had a magical flavor enhancing power. Then, in the midst of these heady times, something happened that kicked me over the top.

My sister got a piano. There sat this magical instrument glistening in the family room. And in a flash, I’d sized it up. Black keys, white keys…laid out in stark symmetrical simplicity. Pfft! How hard could it be? In the hands of a master it was magic. But for some reason, when I sat down to make magic, my sister’s piano sounded like crap! So, I changed my posture. Crapville. I adjusted my elbows just so and sway gently. Crap on toast. I tried channeling my inner Beethoven, but Ludwig was having none of it. That’s when I realized that it had nothing to do with our piano, the problem was with me. I wasn’t playing loud enough!

Just as my cacophonous tinkerings began to attract a loyal following of stray cats and buzzards, our little next door neighbor friend got a piano. Many were the summer days that I’d play football and laugh while he sat inside playing his scales with his teacher. The monotony, the drudgery.

Still, the competitive spirit within me was roused. And as the summer lazed along, my piano poundings had progressed from Neanderthal to early Cro-Magnon. But by then, our little next door neighbor began working on a song, an actual ditty that he practiced and practiced with his stubby little digits. Soon his klankers, missed fingerings and sluggish passages disappeared and he was playing beautifully. Hot Crossed Buns never sounded so good. As I passed his house on my way somewhere decidedly more fun, I nodded in his direction. Go, little dude. He’d won my grudging respect. I’d been bested. But my life was about to change.

I got accepted to prep school. And while there, I did something that changed my life forever. I joined sports teams. I’d already been a pretty good athlete, but now I had coaches, and practice every day. There were fundamentals; there were drills that I could only do with one hand but not the other. So I had to expand and prolong my practicing. And there were kids who were much better at it than I was. And my competitive spirit was roused once again. I started to practice the fundamentals, and I learned the plays, and even though I was impatient, I did the drills over and over. I got better…and better. I began to realize the truth of the adage, “practice makes perfect.”

Although the obsession with collapsing time has hounded me like so many bad yearbook photos, I learned two things from sports that I’ve never forgotten: 1. Most meaningful skills require practice and experience, and 2. There is no fast track to experience.

That’s why I’m surprised whenever I see very astute training professionals talk about doing things in “minutes.” It concerns me. Maybe they know something I don’t know, but I’ve never experienced a time in my life when I could find that shortcut or a “hack” to the meaningful estate called excellence.  And believe me, I’ve tried…and tried. It may put the client at rest to hear that their people will spend less time with that pesky training and more time doing their jobs, but isn’t part of their jobs learning how to do their jobs more effectively? Since when were quality skills picked up without daily practice and periodic reinforcement? Don’t we have many of the problems we have today because we haven’t spent enough time developing the capabilities needed in the modern workplace? Can “short and sweet” be realistic when addressing soft skills development? Is “less time training, more time on the floor” realistic when trying to improve those capabilities that impact the bottom line or affect company culture? Is “quicker is better” thinking realistic when the growing need of the hour is deep and lasting behavior change? Let me know when you figure it out because I don’t have time to think about it.